10 Reasons Why Local Filipino Companies Should Use the Internet for Business Promotion? (Infographic) 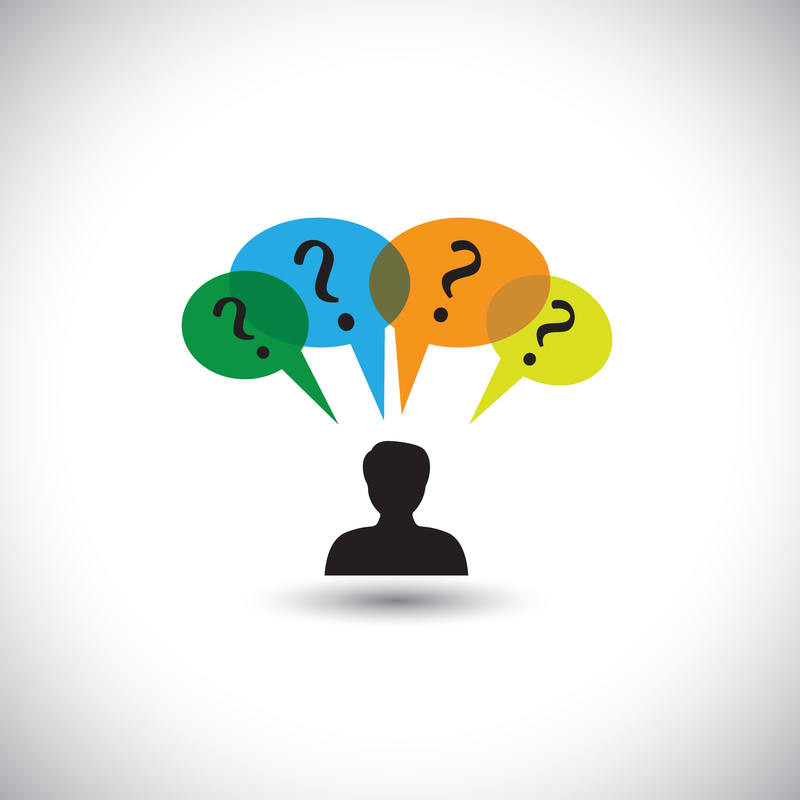 The Internet has emerged as one of the most effective and popular avenues for promoting products and services. This is brought about by the shifting trend towards online commerce as the more preferred channel for doing business and other commercial transactions. This trend holds true not only in the United States and other developing nations but also in other parts of the world, particularly in Southeast Asia and the Philippines.

Local companies in the Philippines should take note of this growing trend towards the use of the Internet for promoting their brands, products and services. The online marketplace is opening new doors of opportunities for local businesses wanting to reach stronger and wider markets that go beyond the confines of their brick-and-mortar establishments. Using the Internet is the perfect avenue for business promotion and the following top reasons will tell you exactly why your business should go online.

The Internet has undoubtedly changed the business landscape throughout the world and will continue to do so in the years to come. It has evolved from being a mere source of information or amusement, into a very powerful tool for promoting your brand, product or service. It is for this reason why industry stalwarts like Google are urging local companies to take a look at online means for marketing their businesses.

Google has teamed up with TNS Infratest and Interactive Advertising Bureau Europe to conduct the Consumer Barometer study. The study highlighted that up to 65% of respondents in the Asia-Pacific region go to the Internet to make some form of preliminary online research before making any moves to purchase products or services offline. The figures go even higher in the Philippines, where it was established that up to 70% of consumers rely or are affected by whatever they learned online in their offline purchasing decisions.

This is just a clear indication of the importance of maintaining an online presence for your business. Without an online channel for marketing and promotion, your business will miss out on the big opportunities presented by this ever-growing online market.

2. Because there are 41 Million Internet Users in the Philippines

Ranked sixth in Asia and is the top 17th Internet using country in the world. The country reached the 33 million Internet-users milestone in 2013, and has reportedly reached close to 38 million Internet users as of January of 2014. It is expected that this trend will continue to grow tremendously and reach figures of up to 41 million. 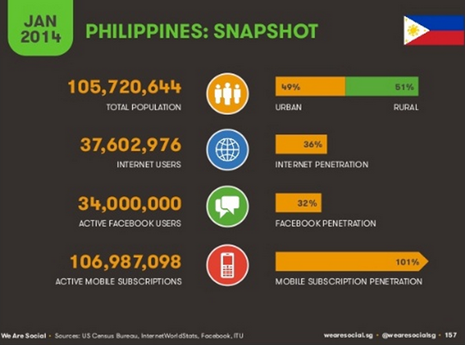 These figures present a very big opportunity for businesses wanting to promote their brands, products and services online. Businesses can go beyond the confines of their physical stores and offices and reach any of the 41 million Internet-using Filipino wherever they may be. These figures however, are merely scratching the surface. With the Philippines having only a 36% Internet penetration, there is still a very wide room for further improvement that businesses can take advantage of. 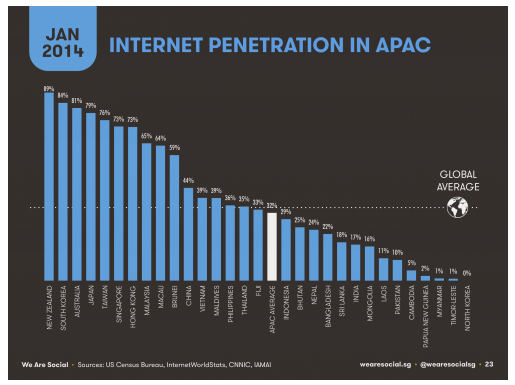 3. Because Filipinos Spend More Time on the Internet than Other APAC Residents 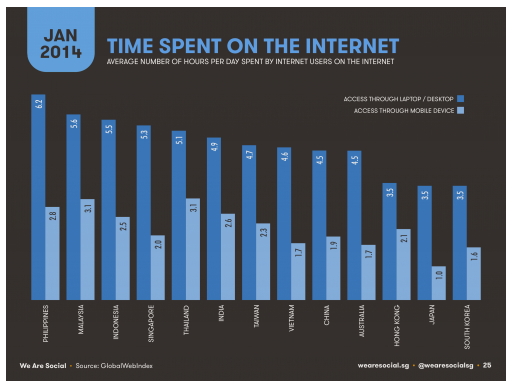 So, what do Filipinos spend their online hours on? Studies show that Filipinos spend most of this time using social media channels, average up to 4 hours a day engaged in various social media activities. This presents a big opportunity for businesses deciding to go online with their marketing and promotions, in a market which is expected to grow to up to $179 million by the year 2016, earning revenues from advertising and ecommerce. This projection is based on information from Internet and Mobile Marketing Association of the Philippines (IMMAP).

4. Because Filipinos are Very Active in Social Media

When it comes to Social Media usage, Filipinos would definitely top the bill. comScore released the Southeast Asia Digital Future in Focus 2013 report which highlighted the Philippines as having a 92.2% Facebook penetration rate, the second highest country next only to Brazil. Another report from GlobalWebIndex placed this figure at an even higher 96% social media penetration, the highest among countries in Southeast Asia. 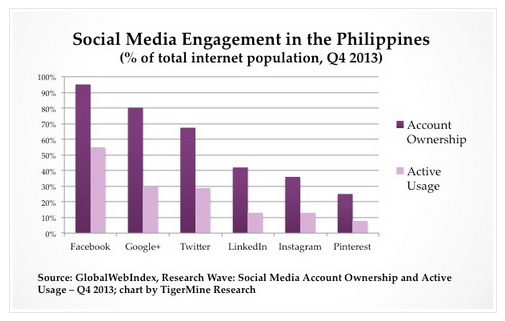 Facebook leads the pack as the social network with the highest penetration from Filipino online users, but other social media channels like Google+, Twitter, LinkedIn, Instagram and Pinterest are also gaining ground. Interestingly, the report also highlighted that up to 71% of Internet users in the Philippines are between 15 to 34 years of age. These pieces of information provide very valuable insights as to the type of markets business owners can expect when going online, particularly in certain aspects that make Filipinos as one of the most unique markets in the world.

5. Because the Philippines Has One of the Fastest Growth in Internet Access in Southeast Asia

Despite the need for more improvements in the digital and online marketing infrastructure in the Philippines, growth rate in terms of Internet access is considered one of the fastest in the whole of Southeast Asia. Even at a growth rate of more than 500%, Internet penetration remains only at 36%, providing more room for improvement and opportunities for companies wanting to promote their businesses online. 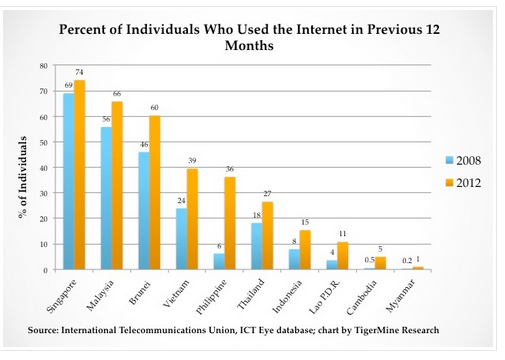 Internet penetration and internet access growth rates encompass various aspects of online users’ daily activities: research, education, entertainment, commerce and business, which are accessible not only through their laptops and computers but also through their Internet-enabled mobile devices. Local companies can take advantage of these growing rates to enable their businesses to reach new markets from various sectors.

6. Because the Philippines is One of the Top Ten Countries by Online Brand Engagement

Brand engagement is very important for business promotions as activities performed by online users in relation to a brand such as website visits, social shares, blogs, social networks and apps. Local companies can take advantage of the fact that the Philippines leads Southeast Asia in terms of online brand engagement, according to reports from GlobalWebIndex. What this means is that Filipinos will most likely to engage in brands, providing a very unique opportunity for business owners. 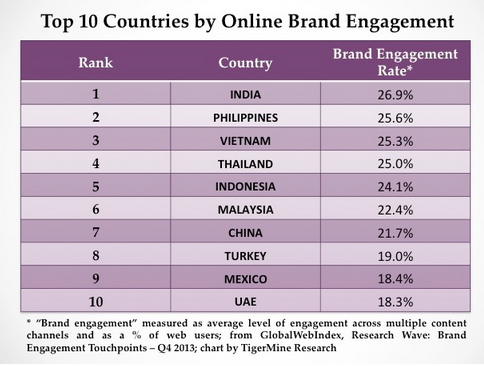 7. Because the Average Age of Filipino Consumers is 25

The average age of Filipino consumers is 25. This is the age where the youth is eager to try out new technologies and new things out of curiosity, entrepreneurial spirit, and search for amusement and entertainment. This is the age where they would want to have their own iPads and Android tablets and smartphones or travel leisurely to Korea, Singapore, Hong Kong and other luxury destinations. These activities and trendy lifestyle trigger greater online commerce providing big opportunities for local companies using online channels for business promotion.

8. Because e-Commerce is Soaring in the Philippines

Internet penetration in the Philippines is expected to increase in rates by up to 50% during the next three years. This is triggering a boom of e-commerce in the country, with sites like Lazada, Sulit (now Olx.ph) and Zalora and other online sales and deal sites facilitating convenient, fast, and trustworthy online shopping.

As more and more people e-commerce and online shopping more, it is expected that 2014 will officially usher in the e-commerce revolution in the country. E-commerce is slowly but surely integrating itself to major aspects of Filipino life – from online shopping, to services, to transportation and more – manifesting themselves with the proliferation of mobile apps catering to the Filipino taste, psyche and audience.

9. Because Two-Thirds of Filipino Mobile Users can Access the Internet

By setting up an office in the Philippines, Google has acknowledged the Filipino market as one of the key areas for online business growth. Filipinos are technologically savvy, and with the growing Filipino economy, Google expects local companies to leverage on the Internet for promoting their brands, products and services.

Mobile Internet will play a key role towards this growth, banking on a very high 111% mobile penetration rate driven by 106 million mobile subscribers. Up to two-thirds of these users have access to the Internet using their web-enabled tablets, smartphones and other mobile devices – providing a really large market for local businesses to promote their products and services.

10. Because Post-Crisis Reconstruction will Further Boost Booming Economy in the Philippines

The super-typhoon Haiyan devastated several areas in the Philippines, but despite this setback the country is still expected to grow by more than 6 percent this year and the next. Reconstruction is underway but with an already booming business and economic landscape, there is an expected increase in investments, commerce and consumption.

The Internet is a very dynamic and vibrant marketplace that offers tremendous opportunities for local business in promoting their products and services. Business promotion can now go beyond the confines of physical space, with the Internet, cloud-services, and other online channels readily made available for local businesses to use and focus – towards continuous growth.